BNC210 is Bionomics’ proprietary molecule in development for the treatment of Social Anxiety Disorder (SAD), Post-Traumatic Stress Disorder (PTSD) and anxiety disorders. As a negative allosteric modulator of the alpha 7 nicotinic acetylcholine receptor (α7 nAChR), BNC210 has a novel mechanism of action and extensive nonclinical and clinical studies have shown it has several properties which may be useful to treat PTSD, SAD and anxiety disorders. 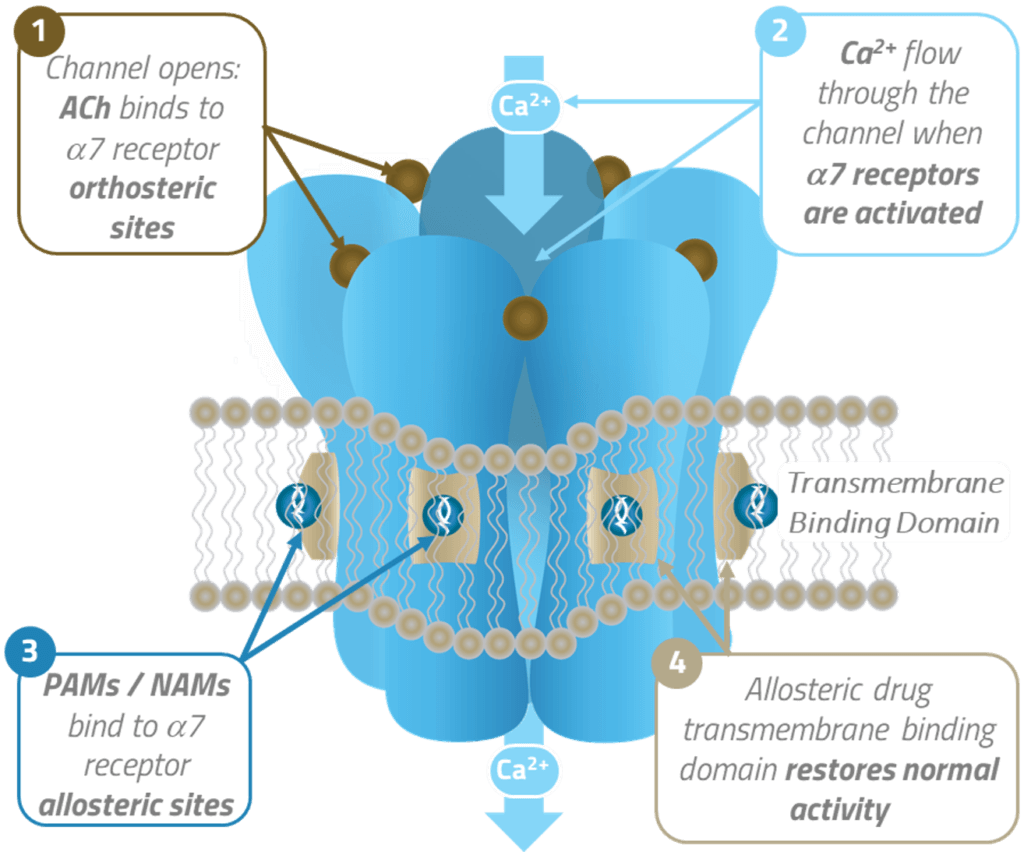 Harnessing the Power of a Novel Neuromodulatory Mechanism 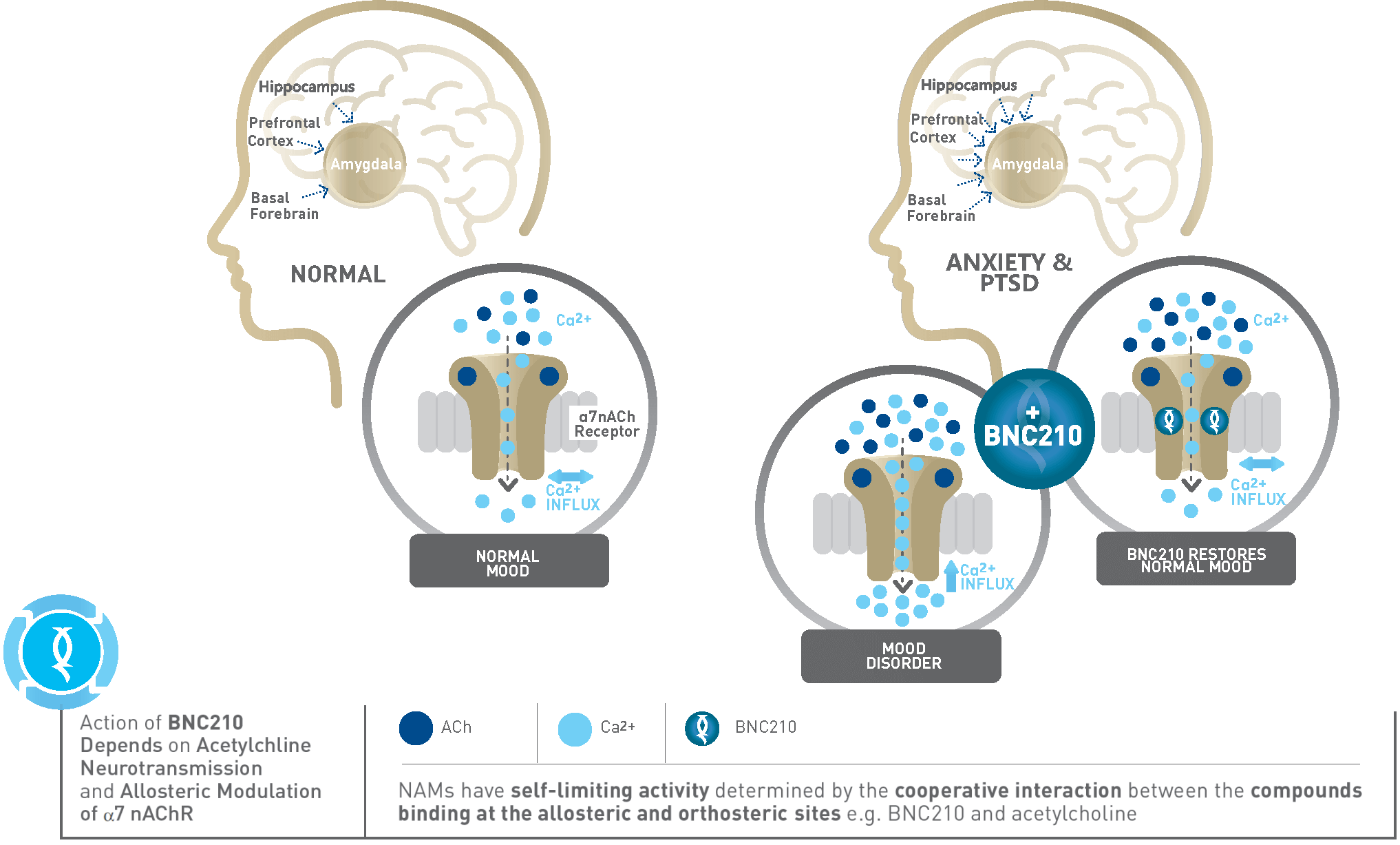 BNC210 Holds the Potential to Addresses the Shortcomings of Existing Therapies

There is a significant need for improved therapeutics for SAD and PTSD with improved efficacy and response rates, fewer side effects and a faster onset of action, which we believe may be achieved by targeting a different mechanism of action.

* Potential benefits based on analysis of data from separate studies and not on results that might have been obtained from head-to-head studies. Such data may not be directly comparable due to differences in study protocols, conditions and patient populations. Accordingly, cross-trial comparisons may not be reliable predictors of the relative efficacy or other benefits of BNC210 compared to existing therapies or other product candidates that may be approved or are in development for the treatment of PTSD or SAD.
1. Includes Valium and certain other benzodiazepines
2. Includes Prozac and certain other SSRIs (Selective Serotonin Reuptake Inhibitors) / SNRIs (Serotonin-Norepinephrine Reuptake Inhibitors)

BNC210 has also demonstrated a well-tolerated safety profile which indicates a potential advantage over currently available medications for the treatment of SAD, PTSD and anxiety disorders (e.g. antidepressants, benzodiazepines). 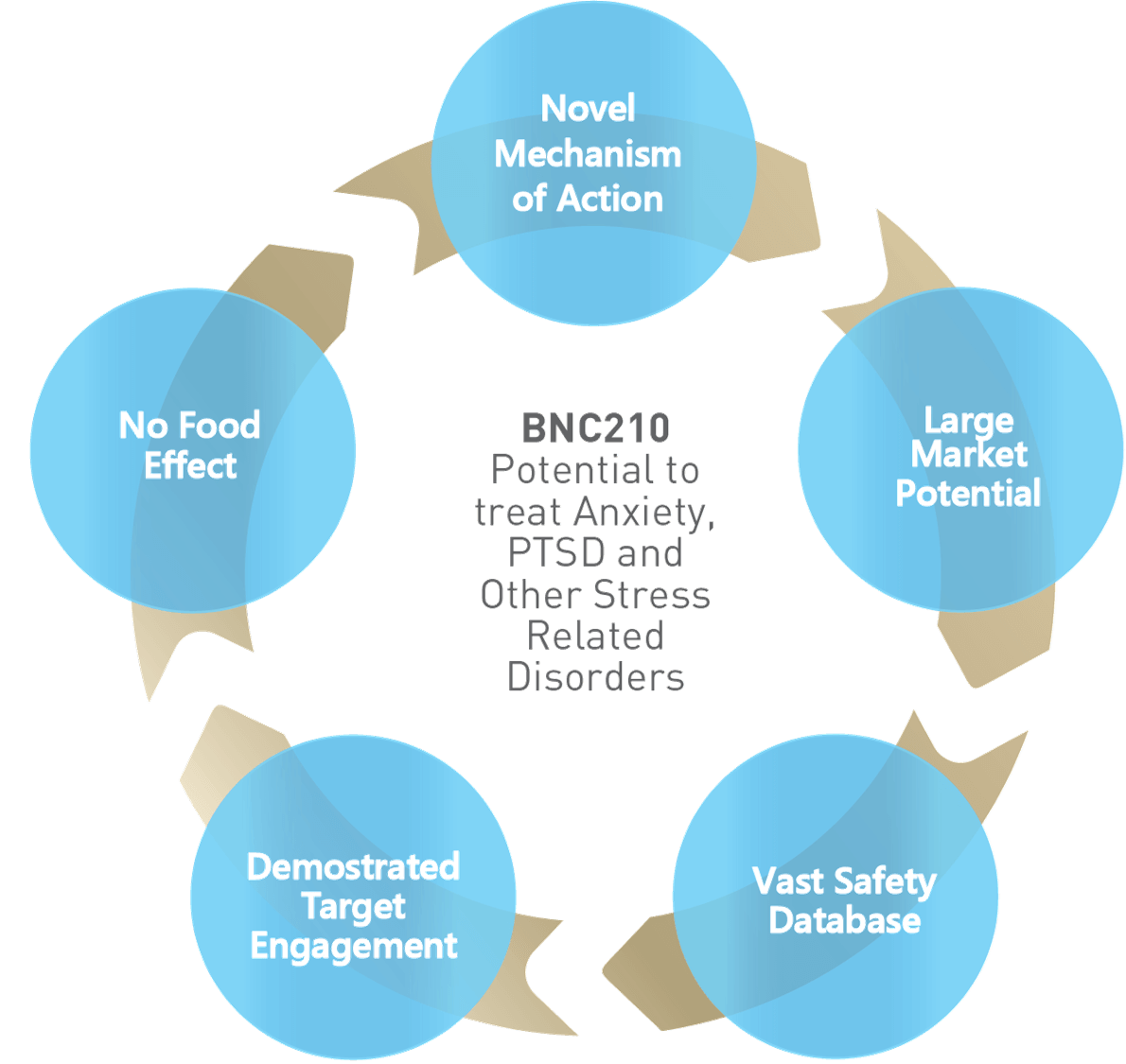 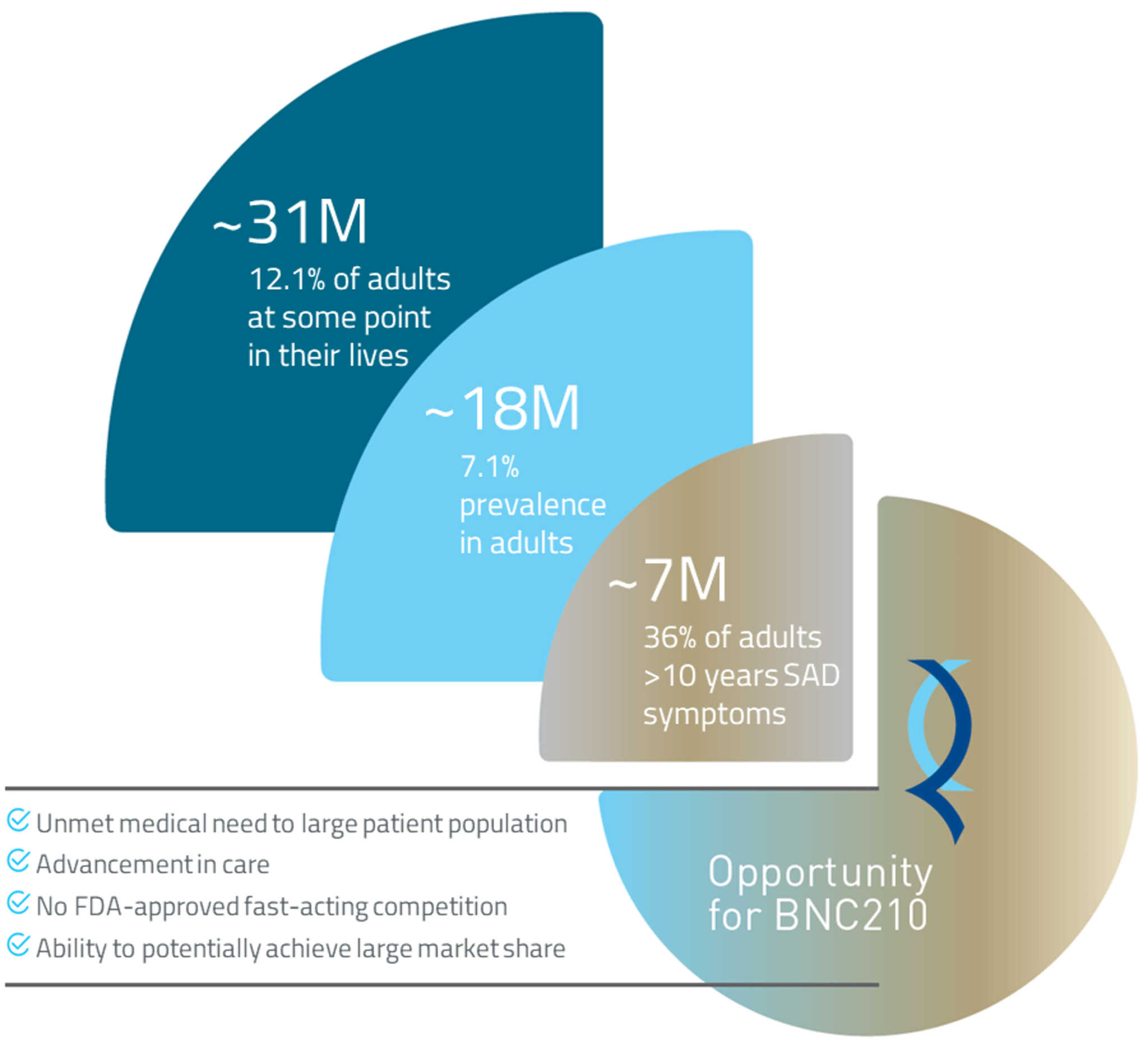 Social Anxiety Disorder is a serious anxiety disorder characterized by the persistent, intense fear of social or performance-related situations in which the person is exposed to unfamiliar people or to possible scrutiny by others. SAD can also be evident in limited settings such as a fear of speaking in formal or informal situations or induced by social interactions across any variety of situations.  These individuals often fear that they will act in a way (or show anxiety symptoms) that will be embarrassing and humiliating, thus, further inducing anxiety. This fear can affect work, school, and other day-to-day activities and can even make it hard to develop and keep friendships. Most cases of SAD develop in adolescence or early adulthood and without treatment it can last for many years or a lifetime and prevent individuals from reaching their full potential.

According to the National Institute of Mental Health, the 12-month prevalence of SAD among adults age 18 years or older in the United States is 7.1% and the prevalence is slightly higher for females at 8.0% than males at 6.1%. Currently affecting approximately 15 million adults in the United States, it is the second most-commonly diagnosed anxiety disorder after phobias. Among U.S. adults, the lifetime prevalence rate of SAD is estimated at 12.1%. SAD typically begins around age 13 and it is estimated that the lifetime prevalence of SAD among adolescents is 9.1%, similarly with higher prevalence rates for females at 11.2% than males at 7.0%. According to the Anxiety and Depression Association of America, 36% of people with social anxiety disorder report experiencing symptoms for ten or more years before seeking help. Based on the typical age of onset of SAD and the patient population’s gross underdiagnoses, in part due to the shortcomings of currently approved therapeutics, the size of the potential market could be considerably underestimated.

Post-Traumatic Stress Disorder is a serious, chronic condition triggered by a broad range of severe trauma types such as traumatic experiences in combat experienced by military personnel and other experiences such as childhood trauma and rape. Trauma exposure can trigger a distinctive pattern of persistent, disabling behavioral and physiological symptoms, which include intrusive memories and nightmares of the trauma, severe anxiety, irritability, hypervigilance, depression, difficulty sleeping, poor concentration, and emotional withdrawal.

PTSD significantly impacts all aspects of life and the day-to-day functioning of people with this debilitating disorder. It is estimated that up to 30% of PTSD sufferers will also commit suicide, underscoring the severity and high unmet need of this condition. In addition, PTSD severity is often worsened by co‑occurring disorders that result from PTSD itself such as major depression, substance abuse, and mood and anxiety disorders. The Clinician-Administered PTSD Scale (“CAPS”) is considered to be the gold-standard criterion measure to diagnose and assess the severity of PTSD symptoms in patients in both clinical trials and practice. CAPS is routinely updated to reflect the current DSM criteria, the latest of which is the CAPS-5. This scale measures the frequency and severity of 20 PTSD symptoms, which can be broadly classified into four clusters: intrusion, avoidance, negative mood and thinking. These symptoms and comorbidities have been broadly classified into four symptoms clusters (Intrusion, Avoidance, Negative Mood and Thinking, Arousal and Reactivity) in the Clinician Administered PTSD Scale for DSM-5 (“CAPS-5”) which is used to both diagnose and determine the severity of PTSD symptoms in patients and in participants in clinical trials.

Approximately 7.7 million people suffer from PTSD in the United States, a figure which is on the rise. The COVID-19 pandemic has contributed to higher rates of symptoms associated with anxiety, depression, and PTSD[1]. The lifetime prevalence of PTSD in the general population is approximately 8%, making PTSD the fifth most prevalent mental health disorder in the United States (Krystal 2017).  In addition, when adjusted for the frequency of traumatic event exposure, women are four times more likely to develop PTSD than men. In summary, PTSD is a complex, chronic disorder, with many symptoms and co-morbidities that make it difficult to treat. 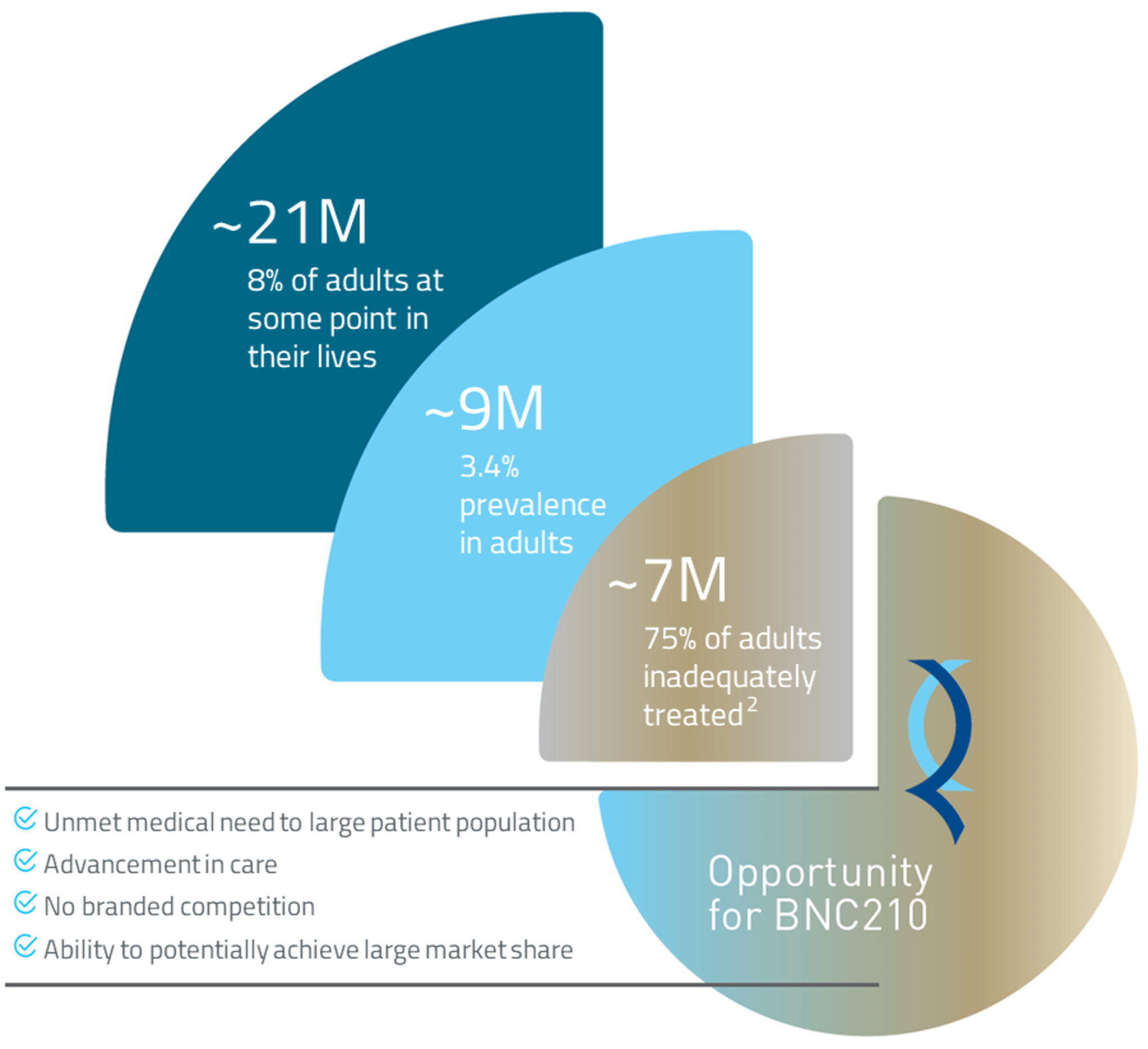 A Phase 2b clinical trial, referred as ATTUNE study, is underway, evaluating BNC210 monotherapy treatment in approximately 200 PTSD patients and results are expected in the first half of 2023. The ongoing trial is a one-to-one randomized, double-blind, placebo-controlled, parallel two-arm (placebo or BNC210 900 mg twice daily) 12-week treatment study that will assess the efficacy and safety of our newly developed tablet formulation of BNC210. The primary efficacy endpoint of this trial is the effect of BNC210 compared to placebo on baseline to endpoint change in CAPS-5 total symptom severity scores after 12 weeks of treatment. In addition, several investigator and self-reported secondary efficacy endpoints related to CAPS-5 symptom cluster severity scores and anxiety and depression measures along with safety and tolerability endpoints will be reported.

In clinical studies, BNC210 has exhibited anti-panic properties by reducing the number and intensity of panic symptoms in a human model of Panic Disorder. In patients with Generalized Anxiety Disorder (GAD), BNC210 has demonstrated anti-anxiety activity in a behavioural model of threat avoidance and on anxiety scale scores (STAI). Using functional magnetic resonance imaging (fMRI), BNC210 was shown to reduce hyperactivity in the amygdala of the brain, a region where increased activity is associated with anxiety.

In an initial trial in patients with PTSD, BNC210 did not show a significant effect compared to placebo on key efficacy measures such as the CAPS-5 PTSD scale, but the pharmacometric analyses showed that the amount of BNC210 patients were exposed to in this study was lower than expected and may be part of the reason for this result. Sophisticated statistical modelling suggests that BNC210 has the potential for significant benefit in patients with PTSD, provided that adequate exposures are achieved. A new tablet formulation of BNC210 is in development that in initial trials has demonstrated the ability to achieve the required exposures predicted by the modelling to be potentially effective. Further development is in progress and a second clinical trial in PTSD patients using the tablet formulation of BNC210 is planned for 2021. The development of BNC210 for patients with PTSD using this approach has been given ‘fast-track’ designation by the US Food and Drug Administration (FDA).

Bionomics has a lengthy history of successful alliances with industry and academia. We are open to expressions of interest with respect to partnership at all stages of development.